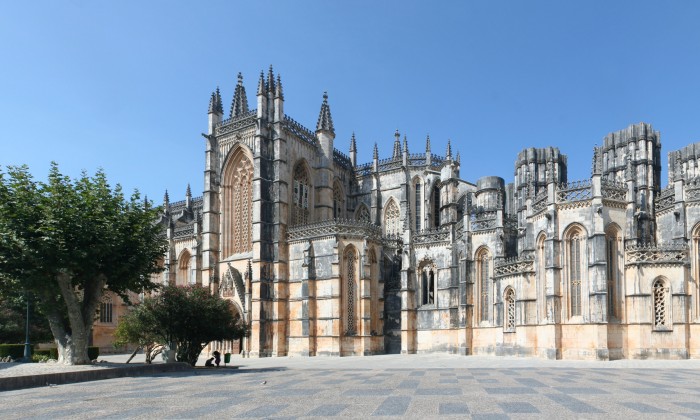 The Monastery of Santa Maria da Vitória ( better known as the Batalha Monastery ) is located in Batalha, Portugal , and ordered the construction in 1386 by King John I of Portugal as a thanksgiving to the Virgin Mary for the victory in Aljubarrota . This Dominican monastery was built over two centuries until about 1517, during the reign of seven kings of Portugal , although since 1388 there have already lived the first Dominicans . Example of the Portuguese late Gothic architecture , or Manueline, is considered World Heritage by UNESCO , and July 7, 2007 he was elected as one of the seven wonders of Portugal . In Portugal , the IPPAR still classifies it as a National Monument since 1910 .

At the start of the building of the Monastery of Batalha was built a small temple , the remains of which were still visible in the early nineteenth century. It was in this building – Santa Maria – a-Velha , also known as Old Church – who celebrated Mass, giving support to the shipyard workers . It was a poor work done with limited resources .

In – schematic traits knows the evolution of the site itself and the degree of progress of the works . It is known that the initial project corresponds to church , cloister and monastic dependencies inherent , as the Chapter Room , vestry , dining and attachments . It is a model that resembles the adopted , in terms of internal organization , the great monastery alcobacense .

The Founder’s Chapel , funeral chapel , was added to this initial draft by King John I own , as did the roundabout Funeral known for Imperfect Chapels , the initiative of King Edward .

The lower cloister and adjacent dependencies , would be due to the initiative of King Afonso V were observed, the disinterest of John II the building . Would receive the royal favor with Manuel , but only up to 1516-1517 , ie , until its decision in favor decidedly factory Jeronimos Monastery .

The monastery was restored in the nineteenth century , under the direction of Louis Mouzinho Albuquerque , according to moth Thomas Pitt, the English traveler who had been in Portugal in the late eighteenth century , and who had known all over Europe through the monastery of his prints . In this restoration , the monastery suffered more or less profound changes , including the destruction of two cloisters , near the Unfinished Chapels and a framework of extinction of the religious orders in Portugal , the total removal of religious symbols , trying to make the monastery a glorious symbol of Avis dynasty and especially its first generation ( generation illustrious said Camões ) . Date that time the current configuration of the Founder’s Chapel and the extension of the term Batalha Monastery (celebrating Aljubarrota ) over Santa Maria da Vitoria, in an attempt to eradicate the title which definitely remember the religious past of the building .